The Founding Director of the West Africa Center for Crop Improvement (WACCI) at the University of Ghana has commended the Alliance for a Green Revolution in Africa (AGRA) for its investments in agriculture-focused research. 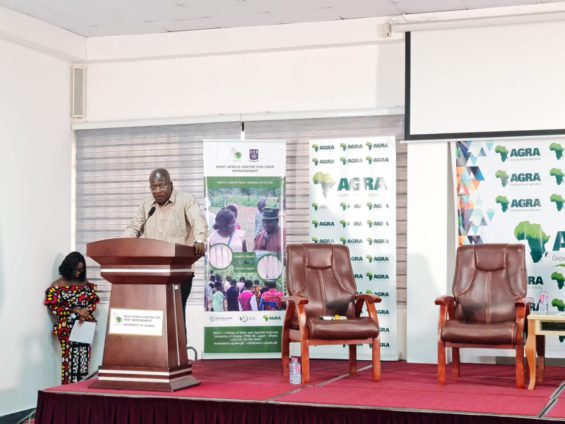 Prof. Eric Danquah says the investment is yielding good results and is helping improve food security in Africa. “I would want to commend AGRA for the audacity to establish WACCI. The audacity to establish WACCI by AGRA n 2007 is what has brought us this far and we can’t commend AGRA enough,” he said. “WACCI is one of the leading institutions for training PHDs in plant breeding in the world. One of the largest in the world. If you look at our track record, we graduated with 95 PhDs in the past nine years. In fact, a number will graduate this year as well,” Prof. Danquah noted.

“Our graduates who are working in 14 countries in Africa have released over 160 varieties for farmers. They have also attracted over $35 million to their research institutions. So, immediately, you can assess the value of quality education,” he observed. Prof. Danquah was speaking at a panel discussion at the University of Ghana to mark Farmers Day. Under the theme, “building integrated and resilient food systems in Ghana.” The West Africa Center for Crop Improvement which trains plant breeders and develops improved seeds for farmers was established at the University of Ghana with funding from AGRA about 14 years ago. Prof. Danquah called for more investments in agriculture-focused research. “If our efforts to transform agriculture is not underpinned by attempts to forever turn out graduates who can innovate to turn the fortunes of the country, we will see that in a short time, the transformation that we started some time ago will be truncated,” he noted.

“This is because we wouldn’t have the quality scientists who will continue delivering the varieties that we so urgently need because we need to forever change the varieties we have,” Prof. Danquah noted. “We can assure you of our commitment to the partnership to re-think AGRA’s new strategy. I believe that AGRA’s new strategy will be well informed, and WACCI will be a key partner in conversations that will lead us into 2030,” he added.

Established in 2006, AGRA is an African-led and Africa-based institution that puts smallholder farmers at the centre of the continent’s growing economy by transforming agriculture from a solitary struggle to survive into farming as a business that thrives. “Together with partners, the organization catalyzes and sustains an inclusive agricultural transformation to increase incomes and improve food security for 30 million farming households in 11 African countries.

“Ghana country manager of AGRA Juliette Lampoh – Agroh, who also spoke at the event AGRA will continue to invest in smallholder farmers to enhance the continent’s food security further.