The recognition, which was during the 12th annual AGRF summit began on 5th September and ended on 9th September under the theme, “Grow. Nourish. Reward – Bold Actions for Resilient Food Systems”. It is a forum for driving the agenda on food and agriculture in Africa. The Honourable Minister for Food and Agriculture, Dr Owusu Afriyie Akoto made a debut at the event where Prof. Danquah was recognized for his excellent achievements in training African agricultural scientists.

Presenting the award to the Professor of Plant Genetics at the University of Ghana, Legon were H.E. Paul Kagame and former President of Nigeria, H.E. Olusegun Obasanjo. This great son of Ghana was honoured for developing a thriving model for agricultural education. Prof. Danquah, also the Founding Director of the West Africa Centre for Crop Improvement(WACCI) at the University of Ghana established the institution in 2007 to train a new generation of plant breeders to develop improved varieties of staple crops in West and Central Africa. Under his leadership, the centre has developed superior maize hybrid varieties yielding up to 11 tonnes per hectare. Comparing that to the output of yields from farmers using traditional maize varieties, it is by far a significant increase from the national average of 1.7 tonnes per hectare. The varieties from the facility have been commercialized to boost farmers’ yield.

Prof. Danquah paid a courtesy call on the sector Minister to officially present the award to him and discuss possible future collaborations to improve Agriculture in Ghana. The Hon. Minister and WACCI have a long-standing relationship that spans over five(5) years. In his early days as Minister of Food and Agriculture, he participated in the 10th anniversary of WACCI. It was during that occasion that he was introduced to the maize hybrids and requested samples. Dr Afriyie Akoto has in diverse ways encouraged and supported the centre, particularly in its partnership with the Legacy Crop Improvement Centre. 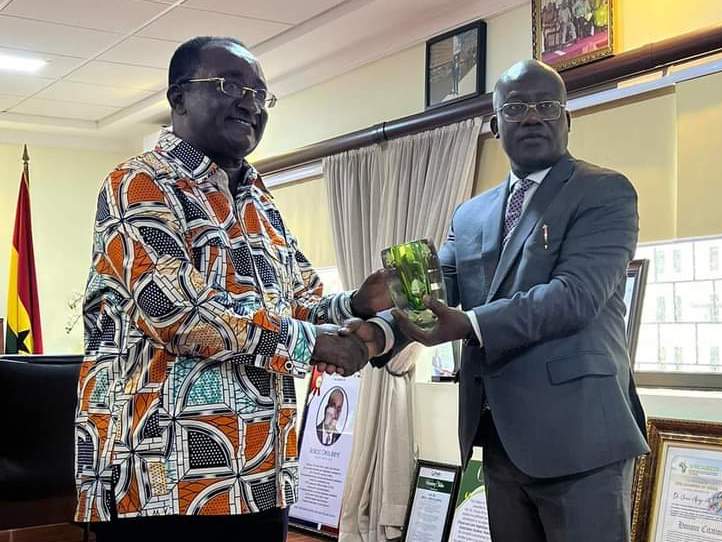 The Founding Director of WACCI is hopeful his visit to the Hon. Minister will start new conversations on how the two institutions can collaborate to get maize and tomato hybrids to farmers.