The CSIR-Crops Research Institute has appointed Dr. Maxwell Darko Asante, a Rice Breeder at the Institute as its new acting Deputy Director, with effect from 1st January, 2022. Dr. Asante replaces the out-going Deputy Director, Prof. Marian Dorcas Quain whose two-year tenure will come to an end on 31st December, 2021. 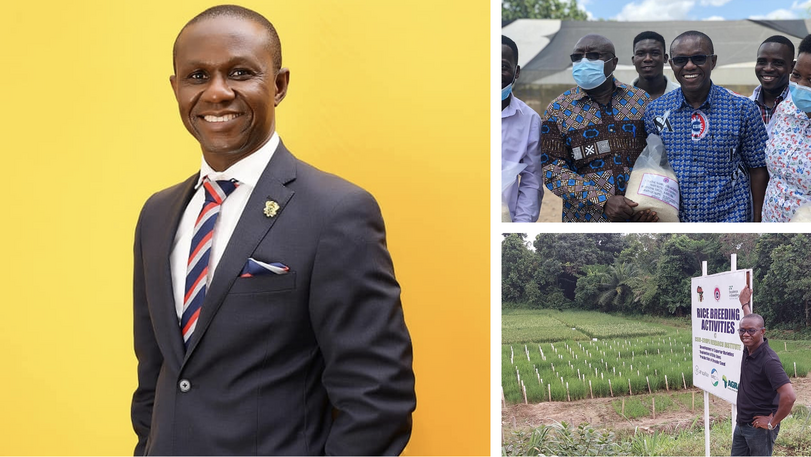 As the lead lowland rice breeder at the Institute, Dr. Asante has contributed to the development and release of fifteen (15) rice varieties; seven of them as the lead breeder. These varieties are currently being grown on farmers’ fields across the country and contributing immensely to Ghana’s efforts at becoming sufficient in rice production. His research has mainly been on the genetics of rice characteristics including grain quality, yield component traits, biotic and abiotic stresses.

He is leading the breeding modernization effort at the CSIR-CRI and was recently appointed by the CGIAR Excellence in Breeding (EiB) programme as a consultant to help modernize breeding programmes in Ghana and some African countries. Additionally, he is currently leading efforts at developing the next generation of high-yielding, fragrant rice varieties which are tolerant to rice yellow mottle and blast diseases and have other consumer-preferred grain qualities.

Dr. Asante has attracted over US $1.5 million from various donors for his projects and has served as the Principal Investigator for several rice projects in Ghana. These include projects funded by USAID, BMGF, AGRA and KAFACI.

He received the Presidential Award for National Best Agricultural Scientist at the 2018 National Farmers’ Day and was also adjudged the overall best scientist at the CSIR-CRI in 2017.

Dr. Asante has travelled extensively and has attended several conferences, workshops and training programmes in many countries around the world. He was a visiting scientist at the Department of Plant Breeding & Genetics, Cornell University and the USDA, ARS-Dale Bumpers National Rice Research Center, USA in 2006 and 2011 respectively.

He has authored and co-authored over sixty (60) scientific publications comprising refereed journal papers, book chapters and conference papers including publications in highly-rated international journals. Additionally, He has trained about 100 interns and students and is currently supervising ten graduate students studying at various universities on the African continent.

Dr. Asante is Ghana’s representative on the African Rice Breeders’ Task Force. He is a member of the Ghana Science Association and the immediate past President of the CSIR-CRI branch of the Research Staff Association of Ghana.

He is a dedicated Christian and married with three kids.