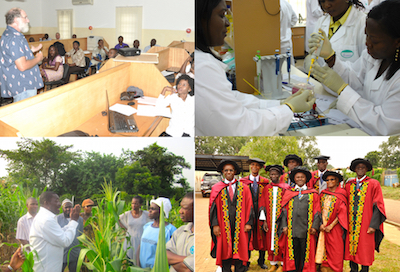 We will develop the next generation of plant breeders and seed scientists needed for the transformation of  Africa’s Agriculture through high-quality research, teaching and learning

WACCI will strive for excellence in all its endeavours comprising the conduct and administration of our research and teaching programmes.

WACCI will demand the highest standards of ethical and professional conduct from all our members.

Our people are our greatest asset. The WACCI community is composed of scientists, students, staff and administrators who are talented, loyal and committed to the continued success of the organisation. Building on the diversity of people and their scientific talents is key to achieving WACCI’s vision.

Nurturing the next generation of scientific leaders and workforce, as well as training in critical plant breeding are integral components of our scientific programmes of excellence.

The Centre owes it to both its donors and the small holder farmers, to ensure that each dollar invested in a plant breeder goes into producing scientists that would spark an African Green Revolution.

The Centre comprise scientists, administrators and technicians each of whom provides a perspective to be considered during the process of setting future directions and making decisions.

WACCI is based on the successful model of the African Centre for Crop Improvement (ACCI), University of Kwazulu- Natal, South Africa. This model is based on the premise that we can train African Plant Breeders in Africa, working on African crops in African environments.Since inception, WACCI has enrolled 137 PhD students from 19 South, East, West and Central African countries and has graduated 81 highly qualified and competent plant breeders. As a result of the outcome of students PhD research projects, national crop improvement programmes have been revived in the sub-region. WACCI graduates have demonstrated the value of quality plant breeding education in the region and made the WACCI programme a model for SSA and beyond. Currently, the Programme has students from Ghana, Nigeria, Niger, Burkina Faso, Mali, Senegal, Sierra Leone, Cameroon, Togo, Benin, Zimbabwe, Ethiopia, South Sudan, Uganda, Kenya, Liberia, Tanzania, Malawi. 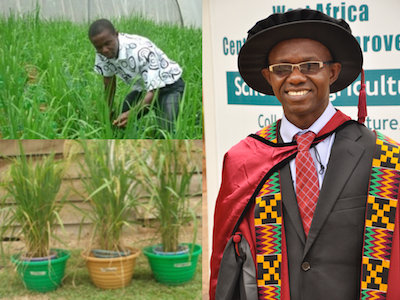 Dr. Maxwell Asante has developed a BC1F2 rice population following a cross between Digang (a local variety with tolerance to abiotic and biotic stresses) and Jasmine 85 (an improved Asian quality rice variety) varieties and used a genotyping by sequencing platform to determine the efficiency of SNP markers for selecting for grain quality loci. His research has led to the identification of molecular markers that could be used effectively and efficiently to improve quality characteristics in rice. This will allow the incorporation of traits that farmers and consumers prefer into varieties with high yields and tolerance to biotic and abiotic constraints. Currently, Dr. Maxwell Asante..... read more

What does WACCI do?

WACCI is training Plant Breeders and Scientists for the West, Central and East African sub-region on classical plant breeding and complementary molecular biology technologies needed for efficient development of superior and adaptable crops. WACCI is one institution among many that are working towards eradicating food insecurity in the sub-region through the training of the people needed to breed and improve food security crops for the rural farmers who currently cultivate unimproved low yielding varieties. WACCI is contributing the needed human resources for the strengthening of breeding programmes of the National Agricultural Research Systems (NARS) in SSA.

Today, WACCI has trained and graduated 81 students and has 137 students enrolled into the PhD programme. The WACCI students are in various stages of the PhD training programme. The WACCI graduates are in the process of releasing new improved varieties of maize, rice, millet, cassava and sweet potatoes for their various agro-ecologies, have published in several peer-reviewed scientific journals and have obtained grants for the support of crop improvement programmes across the sub-region.

"WACCI has gained visibility in the world and is today, the largest institution for PhD education in plant breeding in Africa by current enrollment."