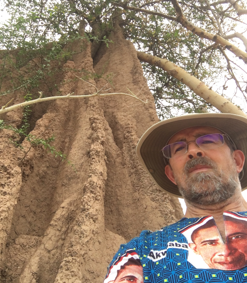 Edward (Ted) Carey is the Regional Sweetpotato Breeder for West Africa with the International Potato Center (CIP), based in Ghana at CSIR-Crops Research Institute in Kumasi. He completed a Ph.D. in horticulture at the University of Illinois in 1985, and took a postdoctoral position as a cassava breeder at CIAT in Cali, Colombia.  He joined CIP as a sweetpotato breeder in 1988 and was based at CIP HQ in Peru until 1993, when he moved to its regional office in Nairobi to serve as the Regional Sweetpotato Breeder, working with partners in eastern and southern Africa until 1999.  From 1999 to 2010, Carey worked as State Extension Vegetable Specialist, first as Associate Professor and then Professor at the Dept. of Horticulture, Forestry and Recreation Resources, Kansas State University. In 2010, he retired from Kansas State University as an Emeritus Professor to rejoin CIP, and has served for the past eight and a half years in West Africa. He has authored or co-authored more than 200 publications in peer reviewed journals, book chapters and conference proceedings.  He has advised 19 MS and 12 Ph.D. students. He currently serves as an advisor to the CGIAR Excellence in Breeding Platform, and as cluster leader for the Breeding Community of Practice in the CGIAR Research Program on Roots, Tubers and Bananas. In West Africa, he is devoted to achieving the vision of the Sweetpotato for Profit and Health Initiative.