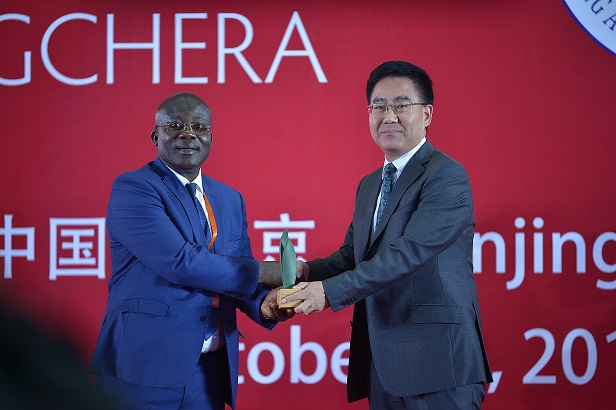 The award honours Professor Danquah’s “exceptional and significant lifetime achievements” in agricultural and life sciences, GCHERA officials said. It was presented in a ceremony at China’s Nanjing Agricultural University.  The prize carries with it a cash award of $100,000. 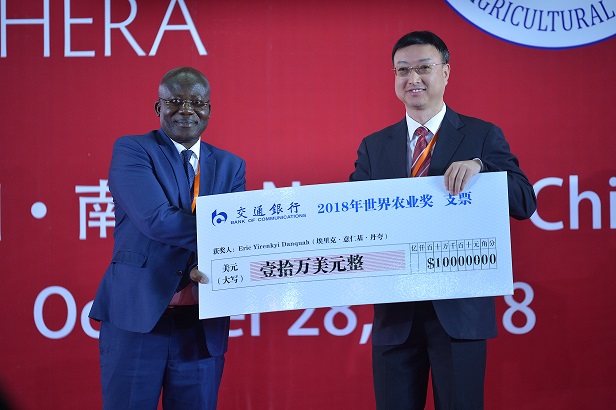 In congratulating Prof. Eric Danquah, the Vice-Chancellor, University of Ghana, Prof. Ebenezer Oduro Owusu, said “Eric Yirenkyi Danquah is highly industrious, internationally-minded person who exhibits high sense of responsibility with outstanding leadership skills. In view of his capacity to transfer theoretical knowledge to practical application, he has been a key originator, contributor and innovator of many of the agricultural concepts and ideas that have led to the development of many seed varieties and training of plant breeders from all over Africa. He has contributed immensely to the agricultural revolution of Africa, and instrumental in the alleviation of poverty in Ghana and beyond.”

Professor Samuel Kwame Offei, Pro Vice-Chancellor at the University of Ghana said "Prof Eric Danquah is a scientist with an uncommon passion to enhance food security on the African continent. He has led initiatives to develop vital scientific solutions to resource and biotic constraints in agricultural production, and made significant achievements in the development of high performing crops. Through his leadership, a critical mass of plant geneticists has been equipped with the skills to integrate genomic innovations in crop improvement programmes, thereby, influencing the career trajectory of many young scientists in the sub-Sahara region." 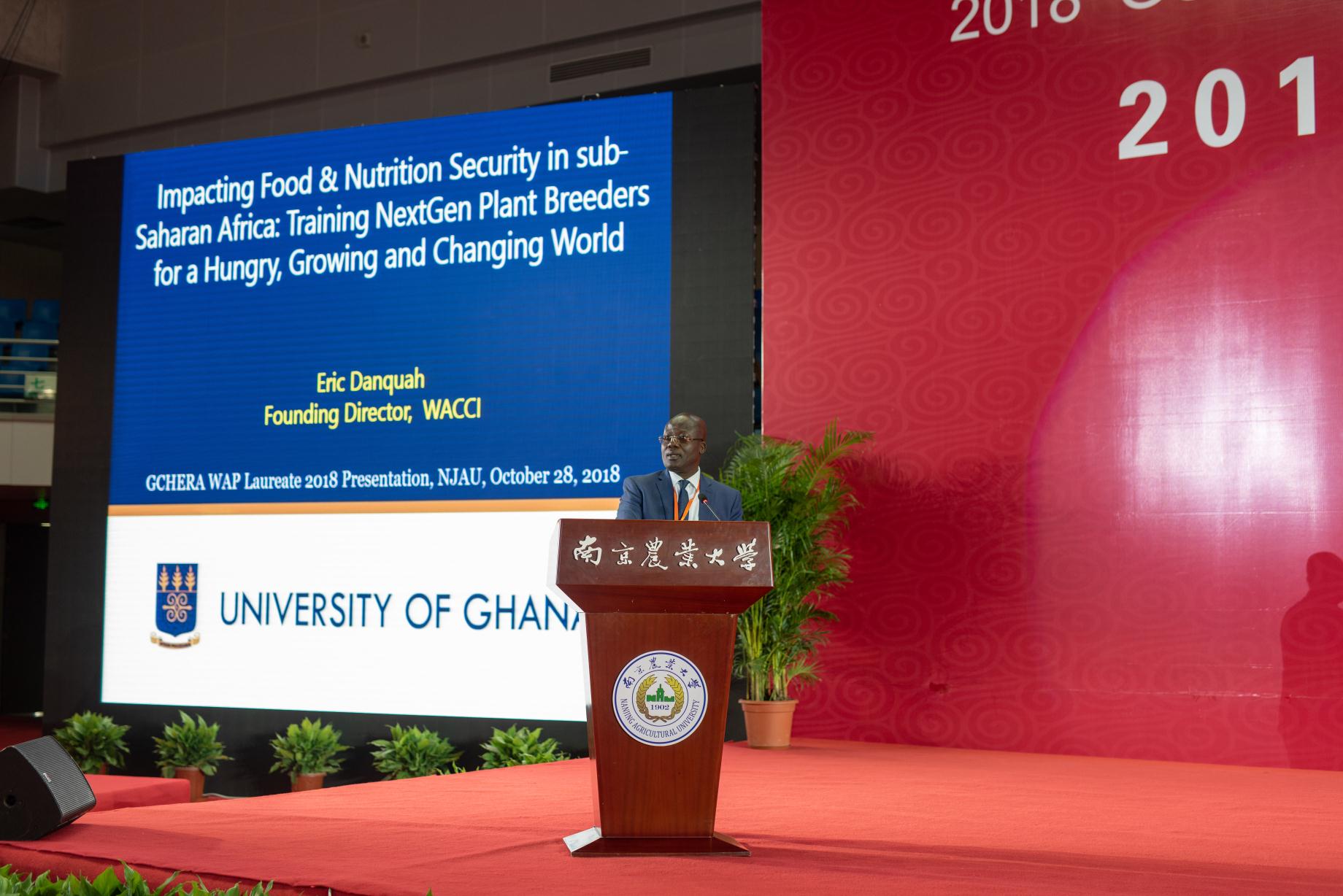 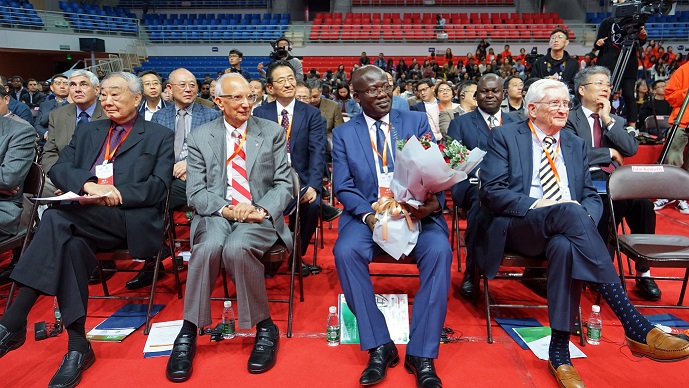 Seated second from right with a bouquet presented to him

“Eric Danquah established the West Africa Centre for Crop Improvement (WACCI), http://wacci.ug.edu.gh led a maize breeding program which has released three high yielding maize varieties in Ghana, created the Seed Science and Technology International MPhil degree program, and significantly contributed to the establishment of the Biotechnology Centre at the University of Ghana. He added “The establishment of WACCI by Prof Danquah provided an environment where young people were inspired to pursue careers in plant breeding. Over 100 students from 19 African countries have had the life transforming opportunity to receive a world class education in plant breeding. His encouragement and support of women to study in this area has been especially noteworthy as today over one third of the students enrolled in the program are women”.

“Many of the graduates have gone on to develop improved varieties of commercial and indigenous crops in their home countries. These highly trained professionals will continue to produce improved varieties of the staple crops of Africa for decades, thus extending the legacy of WACCI in improving the lives of small farmers as well as contributing to global food and nutritional security”, he added.

Professor Ronnie Coffman, Professor of Plant Breeding & Genetics and Director of International Programs, College of Agriculture & Life Sciences, Cornell University, USA said: “Professor Dr. Eric Danquah has been the driving force behind the West Africa Centre for Crop Improvement (WACCI), training the next generation of African plant breeders in Africa for Africa. This is a breakthrough effort to establish and sustain the science needed for the improvement of lives and livelihoods in rural Africa.”

Professor Eric Danquah, at the July 2014 Congregation Ceremony of the University of Ghana, received the Distinguished Award for Meritorious Service.

We congratulate Professor Danquah for this sterling achievement and for bringing honour to the University of Ghana. 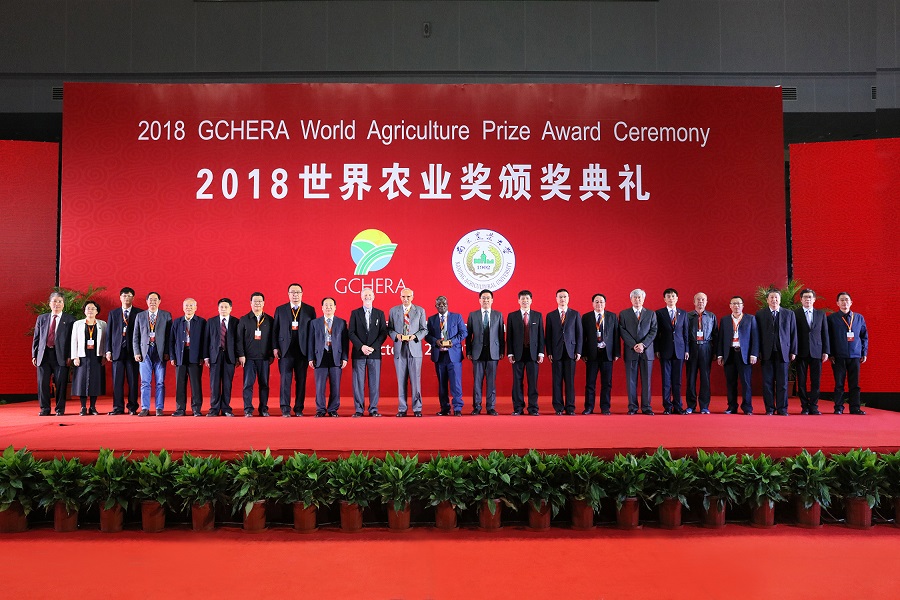 The GCHERA World Agriculture Prize (WAP) was proposed by both Prof. ZHAI Huqu, the former President of the Chinese Academy of Agricultural Sciences (CAAS) and Prof. ZHOU Guanghong, the President of Nanjing Agricultural University (NJAU) and Chairman of Education Professional Committee (EPC) of the Chinese Association of Agricultural Science Societies (CAASS) on October 20, 2012 in the occasion of NJAU’s 110th anniversary.  The prize was approved at the GCHERA General Assembly in Uruguay on 29 October 2012. The prize is now generously sponsored by the Education Development Foundation of Nanjing Agricultural University and Da Bei Nong Group.

The two World Agriculture Prizes are awarded yearly to academic/faculty members from higher education institutions working in the disciplines relating to the agricultural and life sciences. One prize is awarded to an academic/faculty member from a country classified as having a developed economy and the other prize from a country not so classified.

The World Agriculture Prizes aim to encourage the global development of the mission of higher education institutions in education, research, innovation and outreach in the agricultural and life sciences by recognizing the distinguished contribution of individuals to this mission.

The Global Confederation of Higher Education Associations for Agriculture and Life Sciences (GCHERA) was established in 1998.  In 2011 the governance structure was changed so that instead of individual university membership, its membership is now made up of 15 worldwide higher education associations who themselves represent individual universities in the agricultural and life sciences areas.  See www.gchera.com

GCHERA’s mission is to encourage mutual understanding and global cooperation among the higher education associations and to provide, within the global context, leadership in education, research and innovation in the agricultural and life sciences.