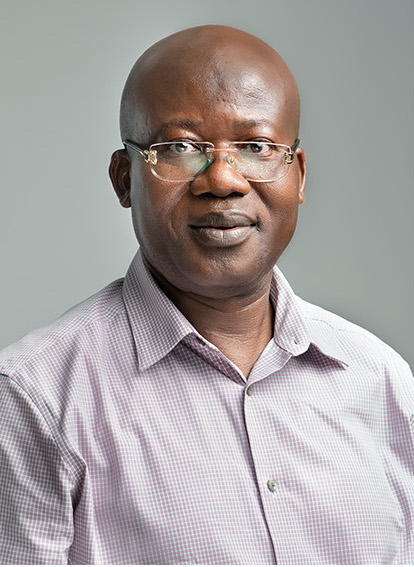 Eric Yirenkyi Danquah is a Professor of Plant Genetics at the Department of Crop Science of the College of Basic and Applied Sciences, University of Ghana. He is a recipient of the University of Ghana Distinguished Award for Meritorious Service, 2013, a member of the IAEA’s Standing Advisory Group on Nuclear Applications, the 2018 Laureate, Global Confederation of Higher Education Associations for Agriculture and Life Sciences (GCHERA) World Agriculture Prize and the President of the African Plant Breeders Association.   He is an Adjunct Professor at the University of Western Australia and a Visiting Scientist at the College of Agriculture and Life Sciences, Cornell University. He was a Visiting Scientist at the BBSRC-Long Ashton Research Institute, UK from 2000 to 2001. Currently, he serves as the Director of the West Africa Centre for Crop Improvement, established in the University in 2007 as a consequence of his shared vision and leadership to train a new generation of plant breeders to develop improved varieties of the staple crops of West and Central Africa. He served as the Director of the Biotechnology Centre, University of Ghana from 2014 - 2019. He was appointed Lecturer in the Department of Crop Science, University of Ghana in February 1994. He was promoted to Senior Lecturer in 2001, Associate Professor in 2004 and Full Professor in 2007.  He has served the University of Ghana in several capacities. He was Senior Tutor of Legon Hall from 2002 to 2005, Head of Department of Crop Science from 2005 to 2006 and Dean of International Programmes from 2006 to 2009. He is currently a member of the Business and Executive Committee. He was the Assessor for Sciences on the Appointments Board of the University of Ghana from 2012 to 2016. He has sat on the Finance and Estimates Committees and served on a number of other committees in the University. He is a former Chairman of the Governing Council of the University of Mines and Technology, Tarkwa, Ghana and current Chairman of the Governing Council of the Baptist University College, Ghana.

Professor Danquah’s professional focus is on genetic diversity in crop plants and how diversity relates to performance. He has consulted for the Science Council of the Consultative Group of International Agricultural Research (CGIAR), the Food and Agricultural Organisation (FAO), the International Fund for Agricultural Development (IFAD), the USAID and participated in over 130 international meetings in Africa, Asia, Europe, North and South America, and the United Kingdom. In 2008, he served on a six-member international panel that reviewed the International Crops Research Centre for the Semi-Arid Tropics (ICRISAT), Hyderabad, India. He was a member of the IFAD International Review Team that evaluated the 10 million US dollar Root and Tuber Improvement Programme in Ghana in 2003. He was also a member of the international peer-review committee of the Volkswagen Foundation’s Africa initiative on “Resources, their dynamics and sustainability - Capacity Development and Comparative and Integrative Approaches” in 2009 and 2010 and a member of the Steering and Advisory Committee of the CGIAR Dryland Cereals research project led by ICRISAT, 2014 - 2017. He is a member of the Maize Genetics Executive Committee, a member of the Advisory Board of the Centre for African Leadership Investment and Development, Leipzig, Germany, a member of Technical Advisory Committee (TAC) of the Bill and Melinda Gates-funded AfricaYam Project based at the International Institute for Tropical Agriculture (IITA), Ibadan, Nigeria and a member of the Advisory and Management Board of the African Centre for Crop Improvement, University of KwaZulu-Natal, South Africa. Professor Danquah has attracted over US$ 30 million to the University of Ghana for research and development projects, including the US$8 million World Bank Africa Centres of Excellence (ACE) Project, the ACE Impact grant of US$ 5.5 million as Principal Investigator and a competitive research grant of US$ 1 million as Principal Investigator from the African Union Commission and European Union for research on food and nutrition security in some selected crops. He has facilitated the establishment of several link programmes some of which have opened opportunities for PhD placements for UG students in world-class universities. He was instrumental in securing funding for the University of Ghana Water Augmentation Programme in the mid-2000s. He has 111 refereed journal articles, 4 books, a book chapter and over 40 other publications to his credit. His WACCI project has enrolled 137 PhD students in Plant Breeding from 19 African counties and graduated 81 students who are leading plant breeding programmes in National Agricultural Research Institutions in Africa. He has also introduced a new Masters programme in Seed Science and Technology, which has attracted 55 students in five years. Three improved maize hybrids which yield between 9-11 t/ha have been released by WACCI for commercialization in Ghana under his leadership. He has a passion for and a commitment to appropriate organisational functioning and the use of science for development and has mentored many young academics. He also has the flair for farming and has engaged farmers over many decades in best practices. He serves on the Advisory Board to the Federation of Young Farmers, Ghana and is the Chairman of the Advisory and Oversight Board of the Samira Empowerment & Humanitarian Projects, Ghana. He is a Fellow of the Cambridge Commonwealth and Cambridge Philosophical Societies and an award winner, 2nd Ghana Agribusiness Excellence and Leadership Award, 2019 - International Agribusiness Leadership Personality of the Year.